Our Esteer Holydays are finished and our work it's going to restart...
Continuing down the road of the awareness campaign around topic of disability, today our intention is to share with you this meaningful video because we think that, in order to face new challenges that coming every day, the disabled people, but not only them, don't have never to understimate the power of their dreams and motivations..

This project has been funded with support from the European Commission.
This publication reflects the views only of the author, and the Commission cannot be held responsible for any use which may be made of the information contained therein.

Posted by TemerariiEVSproject at 7:02 AM No comments:


THE TEMERARII TEAM HAVE THE GREAT PLEASURE TO PRESENT TO YOU

During Febrary and March we worked to prepare the script, to create the set desing and costume and to prepare the actors for the rehearsal... and now we are pleased to present to you all our work.

Posted by TemerariiEVSproject at 4:42 AM No comments:

Wheelchairs are the best way to move for these people who, because of natural or accidental causes, cannot use their legs. Although this can seem a very comfortable way to travel, one person in wheelchair face a lot of problems. First at all, not too many cities are adapted to these disabilities, some buildings don’t have ramps to enter, an elevator to go to the upper floors or adapted bathrooms. But also there is a problem if you want to move through the city because the public transport not necessary have a way to allow you to enter with a wheelchair –you only need to see the trams in Arad.
But in this article, we won’t speak about the problems in the public transport –you can read other posts in this blog related with this topic. We’ll deal with something related with leisure: Wheelchair sports and its specific chairs.

Due to the quantity of sports, we’ll only allude to the most popular. Each sport needs a chair especially adapted to the game. Because they need to withstand fast movements or violent impacts, these chairs are more stable and lighter than a daily one, but have the problem that it’s impossible to fold them, so you need a lot of space to have one of them.

During the last decades, wheelchair sports increased their popularity appearing in tournaments and the Paralympic Games (last one celebrated in Rio de Janeiro). Due to that, we can find a lot of diversity strengthening some of the chairs while others are more focused in velocity and freedom of movement. Here we have some of these sports and its wheelchair:

-Tennis wheelchair – Wheelchair tennis are designed to move in a fast way from one side of the tennis court to the other. For that, the wheels are extended so that the player can arrive to the ball and they allow turning fast to left and right. Brad Parks, who started to be in a wheelchair due to an accident in a mountain, decided to help others adapting the tennis when he neede rehabilitation (from 1977). That moment suppose the beginning of the sport. But it was not until 1988 when the International Wheelchair Tennis Foundation (IWFT) was founded and, with the help of Brad Parks, the news of wheelchair tennis grew gaining popularity.

-Basketball wheelchair- Although they look very similar to the Tennis/Padel wheelchair, we can find some slight differences. One of these is the iron bar located on the front of the chair. Basketball, as rugby, is a chair-to-chair contact sport. That means that it’s very easy to collide with other player and this bar protect from this collisions. The beginning of this sport is found during the forties when Ludwig Guttman started to adapt some sports to people with disabilities who were at the Stoke Mandeville Hospital, England. The IWBF (International Wheelchair Basketball Federation) regulate this sport with 82 national organizations spread all around the world.

As you can see, every sport needs especial equipment. This is not something easy to achieve because the material can be very expensive –basely, the wheelchair, it need to fix your body- but it’s necessary to play and have a healthy life. And we cannot forget that there are plenty of wheelchair sports that are not as visible as others but still like that we can support like, for example, fencing or Boccia. Try to discover more about these sports and its people!
Posted by TemerariiEVSproject at 6:36 AM No comments:

It's continuing our campaign to increase the level of the awareness about the problems that, every day, disabled people, have to encounter.

Today, our main goal, is to show you how the tram is a very common and comfortable way to travel in Arad...but not for everybody!!!

Posted by TemerariiEVSproject at 7:36 AM No comments:

Accessibility of people with physical problems


During the three months that we are in Arad, we've been observing the city, but not as the average citizen could see his city, but as a volunteers who are engaged with the problems of the common people, in this case, people with disabilities.

Last week we wrote about how difficult is to get inside one of the trams in Arad. But now we want to go deeper and explore the bad things that these trams have (we have to make an exception in the line nº3 where you can find modern trams with ramps so that clients in wheelchairs can enter the transport without any problem). 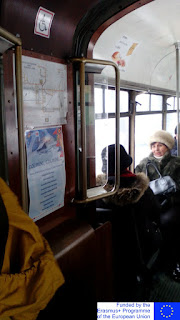 If we go into other trams, for example nº18, you'll see something weird. Sometimes, between the coaches of the tram there is the famous sign of a man in a wheelchair showing that this area is adapted for these citizens. You have some vertical bars where someone could grip if he/she is travelling. But there is a problem. 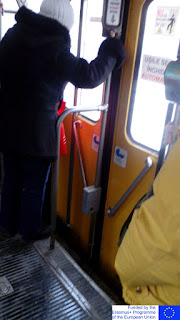 Looking more in the tram, we were not able to see how this person could enter the tram without help of other travellers because you only have stairs, and quite narrow. Even old people have problems to use this stairs!

From here, we'd ask the responsible of the public transport in Arad to have in mind these problems that restrict the mobility of the population with disabilities. Between all we can change the situation.
Posted by TemerariiEVSproject at 5:59 AM No comments:

How much is accessible Arad for people with disabilities? 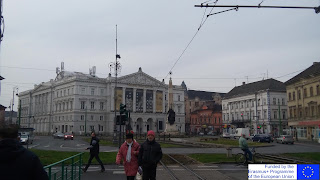 In Arad the common way of travelling is tram. There are many trams that connect different places of this city.
Is nice travel with tram: you are surrounded by local people and you have a lot of time for see them... When your tram is travelling slowly trough the city you can notice different people: children, young people... Old people. Someone travel alone, someone with friends or someone spend his time reading.


But... People with disabilities? How they can move alone around the city?
This week some of us tried to toke a look around for understand how much Arad is accessible... and.. we took some pictures: 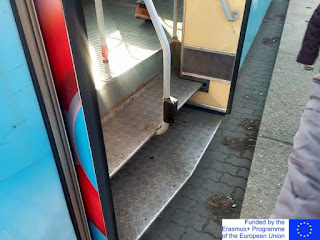 The first impression is that is totally impossible for them get into the trams... Most of them are very very old, and when you want enter into you have to taking the stairs.

And when you are inside?
Some of this old trams have some empty space 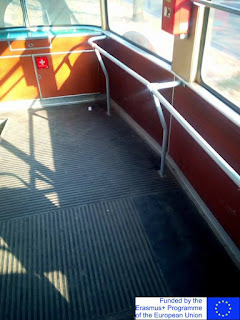 But most of them have a very little empty space inside: 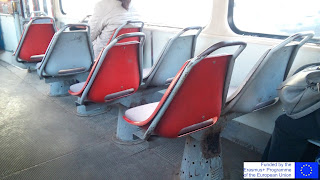 This is the actually situation in Arad: many places connected by trams, a lot of people that can use them... but not all of population is included: why?

Posted by TemerariiEVSproject at 6:21 AM No comments:

After one month, we come back with more news about our project. We had some time for relaxing but now it’s the last period, a period where we have a lot of ideas to apply, new activities (for example, a theatre or a flash-move!) and new centres. So, be patient and you’ll discovery more about Temerarii and its people in the next few months. 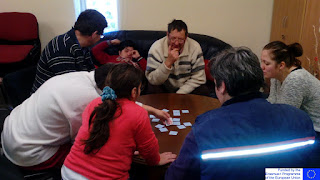 To start January, we decided to do some funny games in Creative and Tabacovici. We realized that they love the game Memory, you know, this card game where you need to find two cards with the same picture. So, we played with them during almost one hour because they didn’t want to stop and we discovered that women in Creative always win this game. 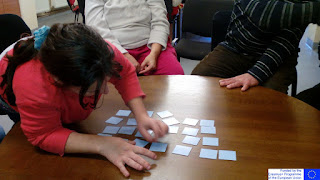 But also we had some other games. As we were not too many people, we decided to use some nice puzzles where they could think about the best way to do it.  Always without forget to express ourselves through drawings. In two hours, we had some nice portraits of each other, some Christmas decoration, and animals. 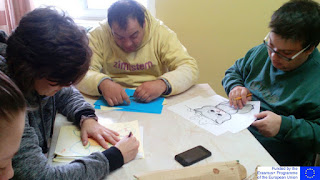 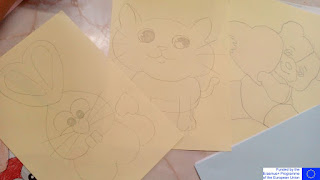 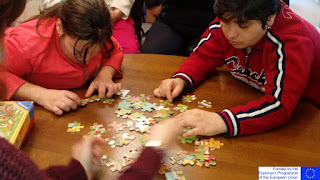 And, as a reward of all this games, they had lunch to recover energy! 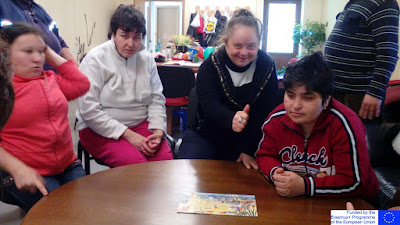 Posted by TemerariiEVSproject at 5:52 AM No comments: 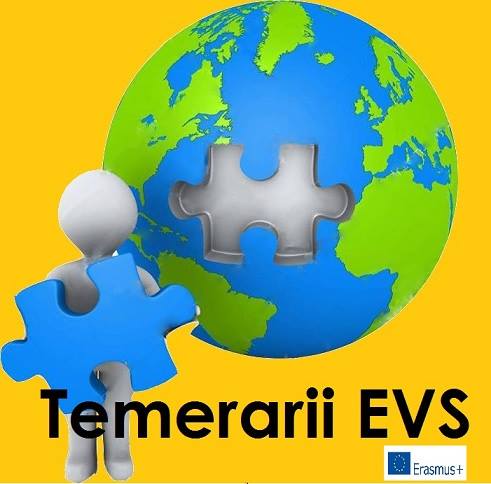 Hello everybody! We are 7 volunteers (Roberta, Laura and Maddalena from Italy, Jose from Spain, Katerina from Czech, Filip and Kristijan from Macedonia) based in Arad in order to help the people with disabilities for a project sponsored by the European Community by Erasmus +. On this blog we will share our experiences, our project and our results.
Stay Tuned!

Temerarii Project has been funded with support from the European Commission.